Can My Dogs Have Too Many Toys? 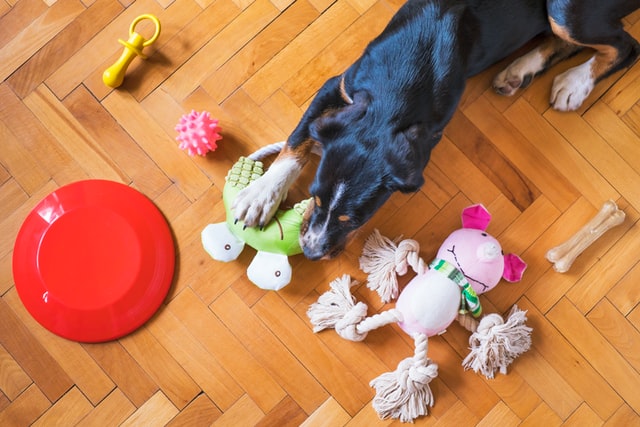 There’s a question that every dog owner has asked themselves at one point or another: can my dogs have too many toys? There are two sides of the coin when it comes to this question. The first side is that, yes, your dogs may be able to get too many toys and could end up not playing with any of them. On the other hand, some people think that there is no limit on how many toys you can give your dog because they will eventually do something with all of them.

What is the purpose of a dog’s toy and why do they need it?

A dog’s toy is meant to be something that they can play with when the owner isn’t around. It gives them a way to pass time and have fun without being destructive in your house. They also serve another purpose, which is teaching dogs how to behave appropriately when their owners are not present. If you don’t teach your pup this now, then it will end up getting into trouble later on for chewing things like shoes or other furniture items when no one is looking.

So what do I mean by using toys for training? For example, if you give your pup his favorite chew toy while he has free reign of the living room but keep him from entering certain rooms where he could get himself into trouble (like the kitchen), then he’ll learn that when you get out the chew toy, it’s time to chill out and relax.

If you give him a tennis ball when the two of you go on walks around town, then he’ll learn that if anyone comes up to pet him while he has his play ball in his mouth or tries to take it from him, all they’re going to do is throw it for him so that he can chase after it again. It’s an important step because your dog won’t understand why some people are allowed to touch their toys but others aren’t; this will confuse them more than anything else and make new interactions with people awkward rather than fun.

The best way to prevent yourself from buying too many toys is by only getting ones that you think your pup can’t destroy. If a toy is going to be destroyed within the first week of getting it, then you probably don’t need another one just like that particular product because odds are good they’ll do the same thing with any other chew toy out there.

No such thing as too many toys get your dog fun rubber dog toys .

How Many Toys Should a Dog Have?

The answer to this question is that it really depends on the dog. Some breeds need more toys than others just because of their size; if you have a Great Dane, then they’re going to go through his/her toy box faster than a Chihuahua would chew through theirs!

One thing that’s important to remember about how many toys your pup should have is how much time they spend alone at home when no one else is there with them. If you work from home or are retired, then chances are good that your pup will be spending most of their days by themselves and can get into trouble without things like chews and balls around for entertainment purposes.

In these cases, I recommend having between three and six different toys for them to enjoy. If your pup is at daycare or school all day, then you probably only need one of two toys available because they’ll be getting plenty of playtime during the course of their busy days.

If you’re worried about whether or not your dog will have too many toys when it comes time for cleaning up, there are a couple things that you can do to keep this from becoming an issue. One way to do so is by removing any unopened new toys away from where he/she tends to spend most of his/her time and put them somewhere out-of-the-way until they’ve been opened.

If possible, open the toy box itself and take out some items while your pooch isn’t around so that they don’t get any ideas about stealing the new toys and leaving their old ones behind.

You can also try putting a few of your pup’s favorite items in a special toy box for safe-keeping while he/she is at home or away from you; this way, if there are certain things like balls or ropes that they really love to chew on when people aren’t looking, then you’ll know where those will be waiting whenever it comes time for playtime again! If none of these work out and your dog still insists on getting rid of his/her old toys before opening up the brand new ones.

Then just make sure to go through his/her toy box every single day and remove any items that your pooch has destroyed beyond repair. You can always use these pieces as tug-of-war toys or throw them away on trash day since no one is ever going to play with them again anyway!

Types of Toys Your Pet Can Enjoy

There are plenty of different types of toys that dogs can enjoy and it really just depends on their preferences. Some pups like plush toys while others prefer balls or ropes to play with; if you bring home a new toy for your fur baby without knowing what he/she likes, then chances are good that they won’t have any interest in the item no matter how much fun other people think it is!

Some types of chewable products include rawhide chews that help keep your puppy’s teeth clean. By removing some tartar build-up from his/her mouth over time rubber bones. Although most dogs tend to go after stuff like this first since it makes an ideal “prey,” finding ones that are made from a safe rubber. That 100% free of any harmful chemicals tends to be the best for your pup. Since they won’t have any issues digesting them in comparison to those that are filled with unsafe plastics even if it takes him/her longer than usual.

The dog owner should always monitor their dogs’ behavior when playing with new toys. Owners need to look at the way their pet interacts with various items. If an item is not suitable or causes distress, then owners may want

Benefits of Having Too Many Toys for Dogs

Having too many toys for dogs can have benefits. It keeps your dog busy when you are not around to play with them and it prevents boredom which would lead to destructive behavior such as chewing furniture or other items in the house. Dogs who get bored tend to become more aggressive over time because they no longer have any distractions that keep their mind off negative behaviors like nipping at people’s heels during walks or jumping up on guests while playing fetch.

Owners need to make sure they monitor how long each toy will be played with before getting a new one so that there is always something available for an extended period of time, especially if this means buying multiple balls, ropes, squeaky plushy dolls and rawhide bones all within the same day!

With the added benefit of decreasing boredom, dogs who have too many toys in their possession are less likely to develop separation anxiety as well – after all, they’re so preoccupied with thinking about how much fun it is going to be when you come home again that there’s just no time for them to get into any trouble before seeing your face once more!

Sometimes a pup might not want his/her favorite toy back but he/she will definitely enjoy playing with other new ones which can prevent problems like stress or depression from developing. This also means owners do not need to spend money on multiple plushies and balls if this would make their dog feel worse rather than better; instead, they could always save up some cash and buy a more expensive, durable toy that they know their pup will go crazy for once he/she realizes it’s the exact one missing from his/her collection!

If your dog has a ton of toys, you may be wondering if they have too many. Generally speaking, the answer is no! Dogs need mental stimulation and physical exercise to remain healthy. In addition to playing with their human family members or other canines in the neighborhood.

Dogs should also spend time alone engaging in playtime with themselves. Toys are an excellent way for them to do this while remaining safe at home during inclement weather or when nobody’s available to take them outside for a walk (or even just because it’s been raining all day.

© 2021 wigglybumdogwalking.com All Rights Reserved.
We use cookies on our website to give you the most relevant experience by remembering your preferences and repeat visits. By clicking “Accept All”, you consent to the use of ALL the cookies. However, you may visit "Cookie Settings" to provide a controlled consent.
Cookie SettingsAccept All
Manage consent

This website uses cookies to improve your experience while you navigate through the website. Out of these, the cookies that are categorized as necessary are stored on your browser as they are essential for the working of basic functionalities of the website. We also use third-party cookies that help us analyze and understand how you use this website. These cookies will be stored in your browser only with your consent. You also have the option to opt-out of these cookies. But opting out of some of these cookies may affect your browsing experience.
Necessary Always Enabled
Necessary cookies are absolutely essential for the website to function properly. These cookies ensure basic functionalities and security features of the website, anonymously.
Functional
Functional cookies help to perform certain functionalities like sharing the content of the website on social media platforms, collect feedbacks, and other third-party features.
Performance
Performance cookies are used to understand and analyze the key performance indexes of the website which helps in delivering a better user experience for the visitors.
Analytics
Analytical cookies are used to understand how visitors interact with the website. These cookies help provide information on metrics the number of visitors, bounce rate, traffic source, etc.
Advertisement
Advertisement cookies are used to provide visitors with relevant ads and marketing campaigns. These cookies track visitors across websites and collect information to provide customized ads.
Others
Other uncategorized cookies are those that are being analyzed and have not been classified into a category as yet.
SAVE & ACCEPT